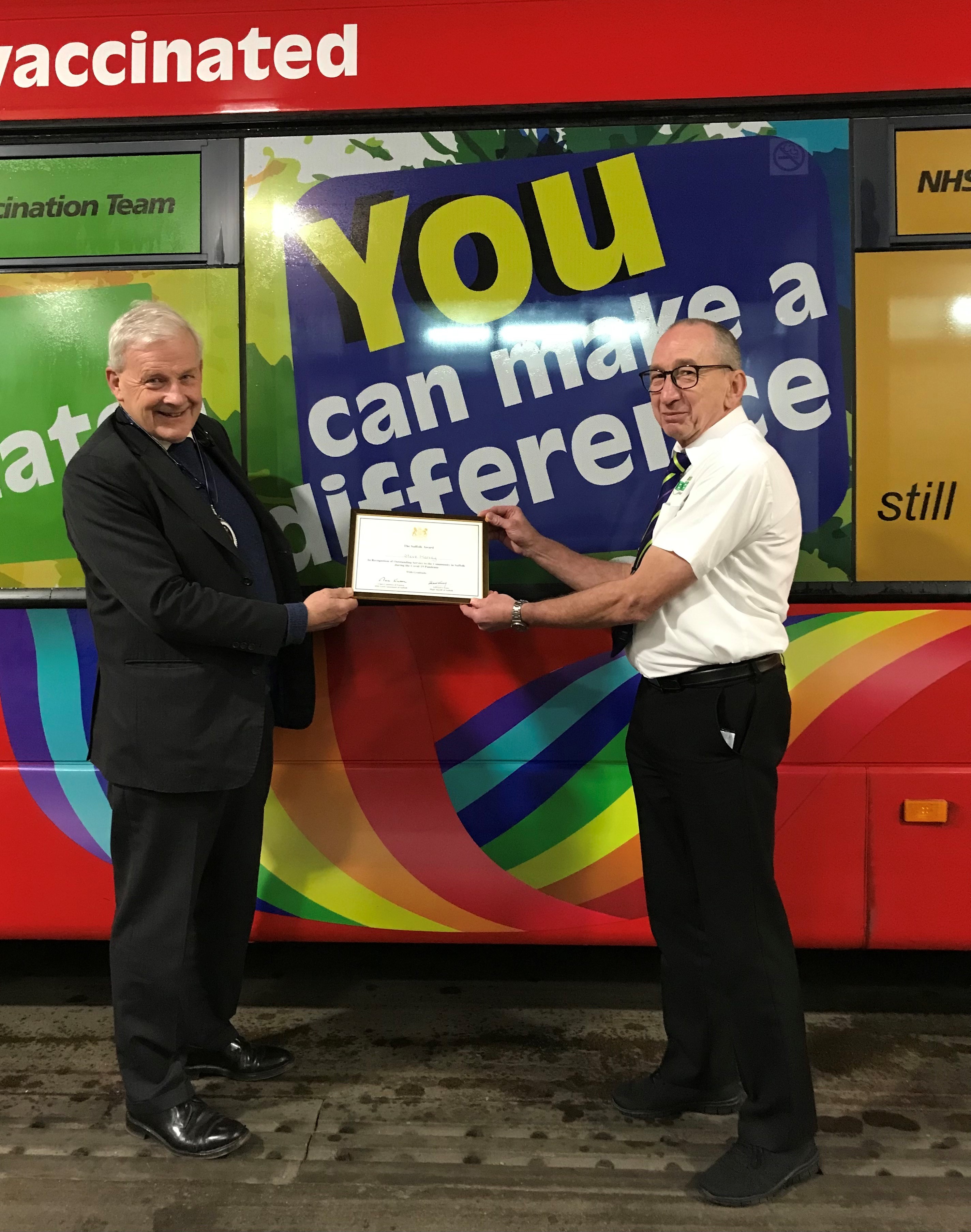 Bus driver, Steve Harvey, has received The Suffolk Award in recognition of his outstanding service to the community during the COVID-19 pandemic.

Mr Harvey has been supporting the vaccination bus from the start, working weekends and undergoing additional training to take on the role of an administrator and infection control lead.

The award was presented by the High Sheriff of Suffolk, Edward Creasy, who also had high praise for Ipswich Buses.

Last March the company converted one of its fleet into a mobile vaccination unit at no charge to the NHS, stripping out much of the original interior and fitting it with electricity, three Perspex booths, a discussion area and a bed to treat any patients who might feel unwell. A second bus was converted in September.

Between them the buses have driven the distance from Ipswich to Hong Kong, clocking up 5,945 miles roving around Suffolk and north east Essex with just over 320,000 vaccinations administered on board. The bus has also supported the vaccination programme in Norfolk.

Receiving his award, Steve Harvey said: “I feel humbled and delighted. So many of us have been involved in this and I’ve met some fantastic people. I’ve really enjoyed it and the experience will stick with me my whole life.”

The High Sheriff said: Steve and Ipswich Buses have been an integral part of making sure that as many people as want it have access to the vaccine.

“It’s a fantastic facility which was freely offered and enthusiastically and sympathetically staffed by the drivers involved.

“It’s as good an example of the community helping out during the covid crisis as you can find.”

General Manager, Ipswich Buses, Stephen Bryce, said: “We have been delighted to do this for both our local community in Ipswich and then work further afield to cover the entire local health system.

“The highlight for me was seeing the one millionth vaccine in Suffolk and north east Essex delivered from our bus at Ipswich mosque.

“Since the first bus went live, I have been contacted by other NHS trusts across the country asking us how we did it. It’s been great to share our experience so people in other parts of the country could benefit.”

“I believe the Suffolk Award also recognises the significant increase in vaccine uptake as a direct result of this initiative and the clear commitment of Ipswich Buses to help keep our community safe and well.

“The buses gave us the opportunity to speak to our multi-ethnic communities, vulnerable adults and people in rural and deprived areas not just about the COVID-19 vaccine, but also about how they can access other services such as cervical screening and health checks.”

Violet May Butler was a beloved wife, mother, grandm…