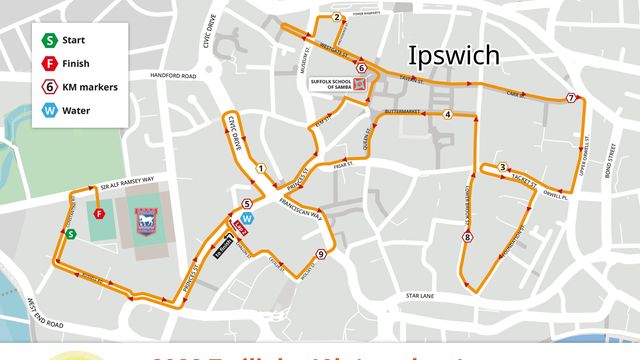 More than 1,000 runners will take to the streets of Ipswich once again as the popular Ipswich Twilight 10K returns to the race calendar after a two-year Covid-enforced absence.

Around 1,200 participants are expected to tackle the course, which starts at Constantine Road and finishes at Ipswich Town's practice pitch at Portman Road, on Friday, July 15.

The popular two-lapped course takes some of Ipswich’s key landmarks such as the Willis Building, Cornhill and the Ancient House.

Whilst the race takes place certain roads in Ipswich Town Centre will be closed which will effect the following services between 18:30 & 21:30.

Will depart from stand MM at Tower Ramparts Bus Station and operate via Crown Street, St Margaret's Street, Grimwade Street and then operate the normal route. Buses will not serve Museum Street, Revolution or Tacket Street during the diversion.

When leaving Tower Ramparts will not serve Museum Street, Princes Street or Ipswich Railway Station and will operate via Civic Drive, Handford Road & Ranelagh Road turning right into Ancaster Road and then following their normal route.

On the inbound journeys buses will turn left from Ancaster Road onto Ranelagh Road and return to Tower Ramparts via Handford Road & Civic Drive.

When leaving Tower Ramparts will not serve Museum Street or Princes Street and will operate via Civic Drive, Handford Road, Ranelagh Road & Stoke Street before turning left onto Austin Street and then following their normal route.

When heading towards Ipswich Town Centre will not turn into Burrell Road and will instead continue along Bridge Street, Star Lane, Bond Street, St Helens Street, Crown Street and into Tower Ramparts Bus Station.

Will operate via Bridge Street, Star Lane and Turret Lane into the Old Cattle Market Bus Station. Services 92 & 97 will not be able to serve Ipswich Railway Station during the diversion.

Updates will be posted on the Ipswich Buses Official Twitter Page @ipswichbuses and to find out more about the Twilight Races please visit their website by clicking here.

Violet May Butler was a beloved wife, mother, grandm…

Ipswich will be celebrating the 70th anniversary of the reign of Queen Elizabeth II in style.

Our buses run a little differently over bank holidays. Check to see if you are affected.

From 19 June to 3 September 2022, St Elizabeth Hospice is bringing a Wild in Art Trail to Ipswich, and we hope you are as excited as we are!…

Following the latest round of retendering in Essex, there will be a change of operator on some services in Essex.