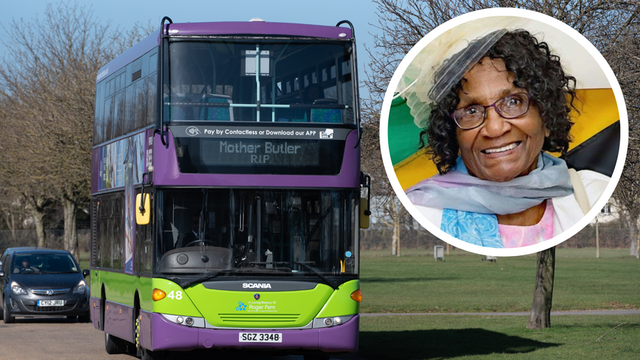 Many arrived in style on a dedicated bus provided by Ipswich Buses, bearing the message ‘Mother Butler RIP.’

Mrs Butler arrived in the UK as part of the Windrush generation. Her husband, David, had joined Cranes of Ipswich in 1957, and saved up for four years for Violet to join him.

She worked in the NHS after moving to Ipswich, starting work at the former Brook Street maternity home, where Karen was born.

Among the congregation were friends and relatives from all over the world, with many travelling from as far as the Caribbean, Canada and United States.

However, many of Violet’s Ipswich friends and family arrived on the dedicated bus service, which was driven by Ipswich Buses very own Brother Clement of Bethel Church. Violet’s faith was very important to her, and she was a regular member of Bethel Church, where she was baptised in 1987.

Violet May Butler will be remembered not only by her family, but by the whole Ipswich community.